Is Your Tween Ready for a Smart Phone? 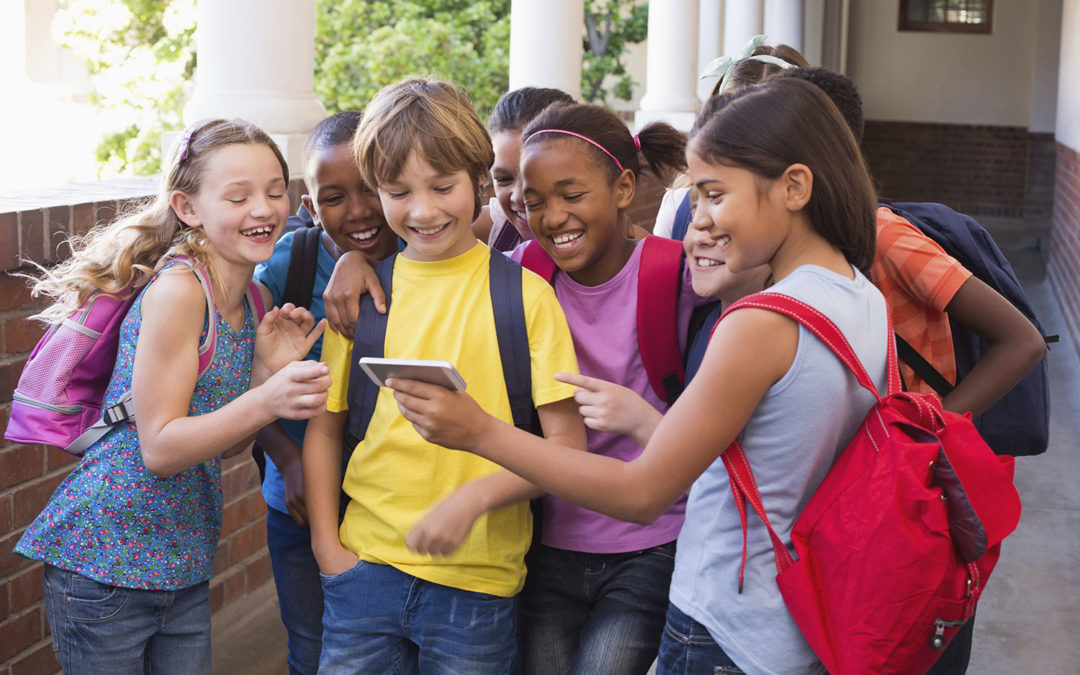 Part Two: A Phone of Their Own: Is Your Tween Ready for Their Own Cell or Smart Phone?

For parents, it’s one of the most dreaded questions of the tween years and no, I’m not talking about the birds and the bees.

“Can I have my own cell phone?”

According to the most recent poll by the Kaiser Family Foundation, 31% of 8-10 year olds and 69% of 11 – 14 year olds have their own cell phones. But in these tech savvy times, your child is probably hoping for a smart phone, capable of not only voice and text communication, but also gaming, access to applications, movie streaming and full Internet access, all in the palm of their hand.

When my oldest was a tween, his first phone was a clunky analog type he (and I) used for piece of mind if I was running late to pick him up from practice. Fast-forward a mere 5 years and my youngest asked for an iPhone – at age 10.

“No way!” we said. (I didn’t even have a smart phone at the time and my husband was still attached to his Blackberry.)

“But all of my friends have smart phones!” he protested.

While he wasn’t wrong, it’s never a good idea to go with the crowd on a decision as complex as this one. Here are some important questions to consider to help decide if your child is ready – and how to keep them safe once you do.

Is it necessary?
If you are considering a phone for personal safety or because you always want to be able to communicate with your child, ask yourself if there is ever a time when he or she is not under the supervision of a reachable, responsible adult. One parent, whose daughter was in tears when she was late picking her up from lacrosse practice and said she was the only one among her peers who didn’t have a cell phone, asked her daughter why she didn’t ask the coach to call her mother. Her daughter told her she was embarrassed to ask for help. “So many kids have phones these days they don’t need to ask their coaches or trusted adults for help, but it’s still a skill I want my daughter to become comfortable with.” Then again, if your child is traveling independently to school or activities on public transportation, a cell phone might be a good safety measure.

How mature is your child?
In the end this may be more important than age. How strong are his or her communication skills with peers? If this is an area of challenge that needs parental oversight and a chance to develop, it is likely too early for a phone of their own. Also, is he or she likely to use the phone appropriately and accept that there will be limits attached to its use? If not, it’s best to wait.

Are you as a parent prepared to enforce limits of cell phone use?
The reality is at this age the phone will be just as much your responsibility as your child’s. You must commit to monitoring your child’s use by keeping abreast of apps your child and their friends may want to use in the swiftly changing world of social media – and putting your foot down if you deem an app not appropriate or dangerous.

How organized is your child?
Does your child misplace or lose things often? How do they treat their valuable personal belongings, such as their bicycle? Does he or she maintain an ordered room and school bag? If not you may want to postpone providing a phone worth hundreds of dollars until they display stronger organizational skills.

Cell or Smart Phone?
Yes, there is a difference. These days smart phones provide access to a dizzying array of activities such as listening to music, accessing the Internet, utilizing social media platforms, playing games and watching television. If you feel that is too much temptation for your tween consider a basic cell phone, able to talk or text but not download apps instead. Another option is the Kurio Phone, a smart phone designed for kids offering enhanced parental controls such as an Internet filtering system, controls for apps and built in GPS.

Before the Purchase: A Discussion of Rules and Limits

You’ve decided to purchase the phone and add a new number to your family plan. Your tween is bursting with excitement and pride that you have deemed them mature enough to handle their very own phone, as they should be. This is a very important milestone in their growing independence. But just like you wouldn’t hand over the family car and a set of keys to a brand new driver, you shouldn’t hand over a cell phone to a new user without significant oversight, continued supervision and strong guidance.

Determine use limits and inform your tween what those limits will be. If school has a no technology from home rule, the phone will remain at home during school hours. Homework should be completed before engaging in any games, texting or social media. Convey the phone is a technology device just like television, computers and tablets and as such counts as their daily screen time tally. And NEVER allow your child to take the phone to their room at bedtime. Determine a safe place to charge it at night.
Check your plan for limits on data usage and parental controls. Many parents have had the unfortunate surprise of a high bill due to excessive data usage. Prevent this early on by teaching your tween to always make sure their phone is connected to the home Wi-Fi, or when out or traveling to other Wi-Fi available. In addition, avoid streaming movies or television shows, as these are notorious users of data. Some plans offer parental controls. For a monthly fee Verizon’s “Family Base” is an app that allows parents to monitor use and set boundaries on the use of devices in their plan, as well as get real time data on numbers of texts sent and hours played per device.
Get to know the apps. The world of apps is enormous and constantly growing. Oftentimes when parents hear of the latest hot app, kids have moved on to the next one. The best policy is to instill a rule early on that no apps will be added to the phone without permission. This way you can read reviews and apply any rules before your child acquires a new app – or tell them it is simply not appropriate for their age. It is important to note that many apps come with age recommendations, though kids may not have to prove they are in compliance before buying, so make sure you read the fine print.
Discuss Safety. You have no doubt had discussions on online safety for computer use. Now is the time to let them know that just because the phone is a fraction of the size, doesn’t mean it’s any less dangerous. The same common sense rules of online safety apply (See Part 1: Internet Safety). Texting between individuals and groups is a very popular use of cell phones among tweens. Reiterate that they are to never type anything they wouldn’t say to someone in person, never type anything hurtful, and to report anything suspicious or inappropriate to a parent right away.

After the Purchase: Continued Vigilance

Ensure privacy and protect against theft by adding a passcode to the phone.
Continue to communicate with your tween about his or her technology experiences. Ask questions such as “Who are you playing the game with?”, “Who are you texting with lately?” or “Has anything made you uncomfortable?”
Consider making get togethers and sleepovers ‘tech free’. Studies show peer pressure can play a big role in misuse of online forums. If technology gets left at the door, kids can make the most of their ‘face to face’ time, remain safe while visiting your home and build important social skills.
Set a good example. Don’t stay glued to your own phone in the presence of your tween. Connect with friends and family through ‘old fashioned’ phone calls rather than impersonal texts, especially for more serious conversations. Forbid phone use at meal times. Utilize a blue tooth for conversing in the car and never text while driving.
Be honest with your tween that you will be checking their phone regularly for appropriate use. You have been clear about online safety and your own rules with regard to cell phone use but don’t stop there. Social skills among tweens are still developing and they need oversight and guidance in all areas of their lives, so why would the phone by different? Regular oversight allows you to deal with issues as they arise and before they become a major problem. If your tween knows you will check he or she may be less likely to engage in misuse of apps or inappropriate text exchanges. If you find something troubling, discuss how to avoid similar situations in the future. Keep communication open.
Balance is key. The siren call of social media can be powerful. Watch for signs of overuse in the form of attempts to use the phone behind closed doors or tantrums when told to stop using it.

Technology is not only here to stay, experts agree it is an arena that is crucial kids learn to navigate safely, and responsible cell phone use is an integral part of that. Instead of viewing a ‘phone of their own’ with dread think of it as an opportunity to usher your child into a role of increased responsibility and independence that will serve them well during the tween years and beyond.